Why do we drive on parkways and park on driveways?

...you're the hippo. But on most days, you're just in the splatter zone. 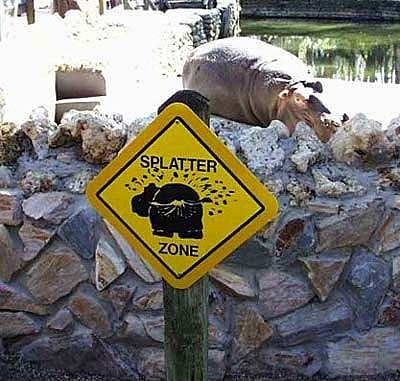 Last week, I straggled (unwillingly) to a night class. I cruised the Faculty lot, spied one remaining spot, and pointed the Imperial Battlewagon towards it, only to have some douche in a Prius cut around me and nip into the spot. Just for good measure, he flipped me the bird. No faculty hang-tag -- a student, running late to class no doubt.

I raged incoherently for a full minute and continued on my search. I passed the douchecanoe a couple times on my scenic tour of Dante's Circuitous Lots of the Damned, and each time I drove by, the fat little blivet (who was wrapped in a too-small red 76ers jacket with a ridiculous ear-flap hat perched on his misshapen noggin) gave me a shit-eating grin and a jaunty little wave. (I think I deserve some sort of honorarium for not plowing him over, too.)

I finally netted a spot at the back ass-end of campus in the maintenance lot. Two of the physical plant dudes are former students, and I helped one of them write a scholarship essay that snagged him a couple grand, so I texted them to let them know I was parked there (lest they call security and Big Stinky Al the Security Mook give me a ticket for being 'Faculty NOT parked in the correct lot') and hiked my way to class.

Yes, I muttered dire imprecations and cursed the whole fucking walk. How well you know me.

I stalked into class, tossed my shit on the desk and apologized for being five minutes late because some idjit took the last faculty spot and was a rude jerkass in the process, and asked for another two minutes of sufferance while I called Big Al to hoist his fat ass over there produce his ticket book and unleash fiery vengeance, only to look up and...

Guess who was standing in front of me proffering  a shaking add/drop slip with an utterly gobsmacked/terrified look on his face? "Uh...hi. I know class started two weeks ago, but..."

I gave my best dead-eyed, sharklike smile and took the slip.  He shrank into his seat as class progressed, and was the first one sprinting out the door at the end of class.

Surprise, surprise. A drop slip appeared in my e-mail box Monday morning.
Posted by CalvinsMom at 12:42 PM 10 comments: Links to this post